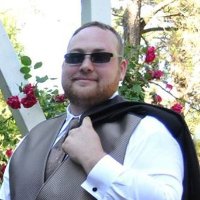 Time in Larsen Lab: 2008-2010
Basic Project Description: Matt was one of my very first students at UNK and, as such, we worked on a few different projects together. He constructed an 8-bucket tipping-bucket array structure for deployment at Rowe Sanctuary and started looking at a wave-pool method of rain droplet detection. He also studied some scaling properties of rainfall.

After graduating with his B.Sc. degree in Physics from UNK in 2010, Matt bounced around. He continued working as a volunteer firefighter in Kearney, and started to work at SynTech research as a Lab Assistant and, later, as a Research Scientist. He worked in telecom working with fiber optic routing and distribution, but he has had a long-term goal of moving towards renewables. In his most recent update email (January 2021) he noted that in mid-2020 he was transferred to the Renewables Team in the Site Group for Civil Engineering at Black & Veatch. His role there is to design stormwater runoff collection ponds and swales for solar panel arrays all across the US.

He tells me he is doing well, living in Spring Hill, KS -- a small suburb of Kansas City. He has a 5 year-old (Margot) currently in kindergarten.
updated: 8 August 2021